Coming soon to an e-reader near you!
I am so excited to announce my upcoming release co-written with Allie Faye.
Who is Allie Faye, well she's me. Confused yet? I have been in the process of separating my dark romance and contemporary titles since this past summer.  I have announced the change a few times but some of you have missed it. I also have readers who don't follow me on social media so adding my Glenna name onto an Allie Faye title gives them a chance to find my Allie books that they might not know about. All my readers win this way, getting another fabulous book written by me. 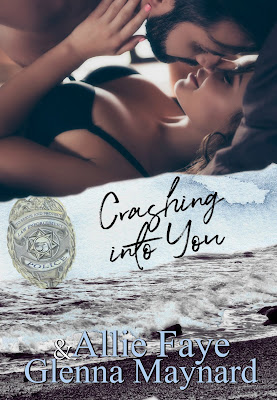 When June and her nightmare of a boyfriend get into an altercation she acts to defend herself, resulting in his untimely demise.


Scared out of her mind when the drug dealer he works for comes to collect the money he is owed she does the only thing she can—run.
Hiding in a small coastal town, the last thing she expects is to move next door to a good-looking sheriff’s deputy.
The longer she stays the more her lies begin to pile up and her relationship with her new neighbor heats up. The unexpected life she is building is about to come crashing down. When June’s past comes back to haunt her will the hunk next door be there to catch her when she falls?

The loud bass of my boyfriend’s truck stereo thumps under the carport as he pulls in and parks. The music cuts off with the engine. I hurry to put his dinner plate on the kitchen table as I hear his driver’s side door slamming shut with more force then necessary.

I jump as the back door swings open. One look at him and I know he’s drunk or high. Probably both. His brown eyes are rimmed with red and he has this lean to his walk. The scar above his top lip looks pink and angry as his mouth screws into a snarl. A dirty blackened hand runs through his greasy hair after working at the junkyard all day stripping wrecked cars of their good parts.
He moves to the fridge and takes out a beer, popping the cap off. Chugging the Miller Lite pony in three gulps he then tosses the drained bottle in the nearby trash.

“I made you pork chops.” My voice comes out in a squeak. I never know which way his mood will go.

Sitting down at the table he picks up his fork and knife cutting into his meat. After chewing half a bite, he spits it out onto my freshly mopped floor. “Shit is fuckin’ dry just like your pussy.”

His insults don’t hurt me anymore. They did at first but not now. I stay quiet and taking away, the rose colored chipped plate dumping it food and all into the sink. I don’t know why I even try anymore. There hasn’t been anything left worth fighting for between us for nearly two years now. Dating the bad boy was fine when I was in high school. I did it to piss my old man off, but now the shit Chris is into is no longer cool. He’s not the guy I fell for. Addiction has an ugly hold on him and it is never letting go.

The chair scrapes across the floor as he pushes it back. I busy myself with getting him another beer. Feeding the beast. The monster who now lives inside him. He accepts my peace offering and goes to the bathroom. I let out a breath when the door shuts behind him and the shower kicks on.

I would leave him if I could. My father kicked me out when I became pregnant at seventeen. I thought Chris was my white knight when he moved me in with him. I was so wrong about him. I was wrong about everything. My hand goes to my stomach remembering how happy he seemed when I told him the news of our baby.

Then one day he got mad at me for no reason and accused me of trying to trap him. I should have seen the signs back then. There were warning signs. I chose to ignore them. I was determined to prove my father wrong and show him that Chris did love me. We were going to make it and be more than another teen parent statistic.

The shower shuts off and his cell phone rings. I hadn’t noticed it laying on the counter. I look at the screen. It’s his buddy, Flip, the guy he deals for. Chris marches into the kitchen with a towel slung low on his waist. The sight used to make my heart skip a beat now it only makes me sad. He’s skinny—unhealthy in appearance and no longer the muscular tough guy.
He grabs his phone and answers the call.

“Lo…yeah. Yeah. I got it. I just got out of the shower. Give me fifteen minutes.”  He goes back to the bedroom, and I lean against the kitchen counter taking deep breaths, trying not to cry as I remember the girl I used to be. The life I thought I should have. The life I imagined Chris would give me.

The bedroom door slams shut, and he stomps through the narrow hall, his eyes trained on me. I wish I could shrink or melt away as his gaze burns through me.
“Where did you hide my shit, you dumb bitch,” Chris roars at me, raising his fist in the air ready to strike.

“I don’t know what you are talking about.” I hold my arms up, folding them over my head for protection as he towers over me.

“Don’t lie to me, June. I know you took it.” I shake my head, but it only makes him angrier as his brows furrow. A crease forms across his forehead as he grabs both my wrists with one hand and yanks me by the hair with the other.  “Just tell me what you did with my stash and I swear I’ll let you go,” he seethes tugging me up by my hair. My scalp tightens and burns as he pulls so hard that he rips the blonde strands out.

“Please, Chris. Let me go. I swear I don’t know what you are talking about,” I cry and plead to deaf ears.

His response is to slam my head down on the green formica counter top. Pain radiates in my left ear as he holds me still. “I’m not playing, cunt. I want what’s mine,” he growls in my ear like a drooling beast and smacks his hand down next to my head.

I squeeze my eyes shut terrified for what will come next. “I swear to you if I knew where it was I would give it to you. Have you checked all your usual spots?”

His grip on my wrists loosens.  I take that as a no he hasn’t looked. He does this at least once a month. He hides his stash, so he doesn’t do up all of his product. The only problem with his method is he gets messed up and forgets what did with his drugs—use them himself.

Letting me go, he storms through our mobile home, and starts trashing the place. I stay where I am in the kitchen not taking the chance of getting in his path or setting him off again. Rubbing the tender spot on my scalp where he ripped my hair out I try to silence the sobs threatening to tear from my throat.

The couch is turned up and the cushions strewn around in the small room. His fist goes through the mirror and blood squirts from his knuckles as he comes at me again. “I need that dope, June. I owe Flip a lot of money for it. If I don’t get it to him who do you think he’ll come after for payment.” His bloody fingers stroke my cheek and I shudder trying to shut my mind down from the bad memories, but they are all I have left.

Our baby would be a two and a half by now, but Chris got into debt with Flip and I paid the price. No, my child paid the price with his life. He beat me so severely I lost our child. Chris had blamed me. Said I took the drugs and we didn’t have any money to pay him.

Anger courses through my veins as his beer stenched breath blows in my face reeking like an old ashtray as well. His fingers move to my throat and he squeezes. My eyes widen as his grip tightens. Part of me hoping that this is it—the day he finally kills me and ends my misery.

“Look at me.” A dark laugh bubbles from his throat as I gasp for air and pull on his hand desperate for a breath. “That’s it fight me you dumb cunt.”

I don’t know what comes over me but the feeling of being tired and ready to give up dissipates as I think about the child he cost me. The happiness he stole from me. I want my life back, the one he robbed me of living. An eerie feeling creeps up on me and I know one of us isn’t leaving here alive. I pray that it isn’t me, but if it is I’ve made my peace. I put my hand on the counter, looking for a weapon. I mange to open a drawer and when I feel a blade slice my finger I don’t think I just grab it and defend myself.

I thrust my hand forward with my eyes closed not knowing if I will meet anything but air until I feel the cotton fabric of his shirt rubbing against me and the warmth of his blood coating my hand.

I open my eyes as shock masks his face and his fingers leave my throat. He looks at me and then the area where I stabbed him in his upper right side.  “You fucking stabbed me,” he chokes out as he grabs the handle of the knife and pulls it out.

I scoot away from him inching toward the back door. He points the knife blade at me. “Oh, you bitch. Nothing would give me greater pleasure.” A devilish smirk stretches across his face as he lunges forward. I grab the skillet from the stove, it’s still full of warm grease and three other pieces of meat, and I swing.

The moment moves in slow motion, like a TKO in a boxing match when the opponent’s mouth goes sideways before the rest of their head. The pan connects with his face and he goes down hard, knocking his head on the kitchen table before he meets the floor. The knife falls from his hand and slides under the stove.

Gripping the edge of the sink I tap him with my foot, but he doesn’t respond.  Bile rises in my throat as I look down at him sprawled in the floor laying like he is waiting to be traced in a chalk outline.
My hand flies to my mouth as hot tears slide down my cheeks. What have I done? Oh God, what have I done?

Posted by Glenna Maynard at 5:59 PM No comments: